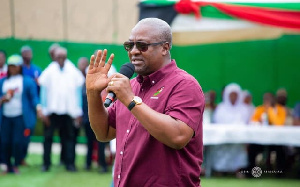 The presidential candidate of the National Democratic Congress (NDC), John Dramani Mahama, has reiterated his earlier warning that his party will not accept the results of a flawed electoral process.

Addressing NDC supporters at Abura on Thursday as part of his five-day campaign tour of the Central Region, he said the Electoral Commission (EC) from all indication has set out to organise a flawed election.

“We are not trouble makers. We want to make sure that all of us believe in this election so that if you win or lose, you are prepared to accept. But when we complain, they think that we are just causing trouble. This can lead this nation to chaos because I said it, on December 7 when this election is flawed, we will not accept it. Who accepts a flawed election? Nobody. And everything the electoral commission is doing is showing that we are heading to a flawed election,” Mr. Mahama noted.

He said the new voters roll, according to the EC, is supposed to eliminate manualvverification but indications are that the December 7 general elections will have more manual verification of voters than any election.

“And when we talk everybody is quiet, and if something untoward happens, then they willvsay it is this person’s fault but we have given enough warning signal that the electoral commission is creating problems”, Mr. Mahama added.

He said the EC now treats the Inter-party Advisory Committee (IPAC) as enemy instead of seeing it as a partner for the conduct of free and fair elections.

Election 2020: Resources have been made available – Finance Minister

The ever beautiful Sister Derby has shared some lovely photos of her while on the set of Lil Win’s upcoming series. Sister Derby undoubtedly one...
Read more

Election 2020: Resources have been made available – Finance Minister

The ever beautiful Sister Derby has shared some lovely photos of her while on the set of Lil Win’s upcoming series. Sister Derby undoubtedly one...
Read more
- Advertisement -

The specialty of Anaesthesia is sometimes indicated as a ‘’Divine Specialty’’.This is because in Genesis during creation’ God gave the first anaesthetic and I...
Read more
Entertainment

A nephew of infamous drug lord Pablo Escobar has said he found a plastic bag with money worth $18m (£14m) hidden in the wall...
Read more

‘I Can’t Help But Love You’, Charly Boy Gushes Over His Identical Daughter, Dewy

ADVERTISEMENT Nigerian filmmaker, Kunle Afoloyan has shared some photos of the interior decoration of his home describing it as “art inspired”.READ...
Read more