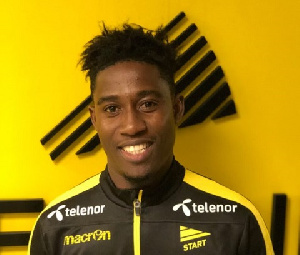 Ghanaian midfielder Isaac Twum was on target for Norwegian topflight side Mjøndalen as they recorded an impressive victory over giants SK Brann.

The former Ghana U-23 player doubled his side’s lead when he pounced onto a pass from Ole Amund Sveen.

Martin Ronning Ovenstad gave Mjøndalen the lead after 13 minutes at the Isachsen Stadion before Twum doubled the lead late in the first half.

Isaac Twum was rock solid in the middle of the back and also provided an attacking threat with incisive passes to unlock Brann’s defence.

The ex-Inter Allies player was replaced in the 84th minute after picking a yellow card in the second half.

The win positions them just a point behind his former club IK Start as the relegation fight continues.

The sixth edition of the Information Ministry’s Nation Building Updates series has kicked off. Today’s Updates is taking place at the Academy of Arts and...
Read more

The sixth edition of the Information Ministry’s Nation Building Updates series has kicked off. Today’s Updates is taking place at the Academy of Arts and...
Read more
- Advertisement -

The specialty of Anaesthesia is sometimes indicated as a ‘’Divine Specialty’’.This is because in Genesis during creation’ God gave the first anaesthetic and I...
Read more
Entertainment

A nephew of infamous drug lord Pablo Escobar has said he found a plastic bag with money worth $18m (£14m) hidden in the wall...
Read more

COVID-19: MODEC supports the fight against coronavirus in Ghana with over $600,000

In the wake of the resurgence of the spread of coronavirus, Mitsui Ocean Development & Engineering Company (MODEC) and its partners have supported four...
Read more
Local News

A Ghanaian-Nigerian Afro dancehall artiste, Mishasha says Wendy Shay is not a creative musician and needs to work hard on her craft.According to her,...
Read more