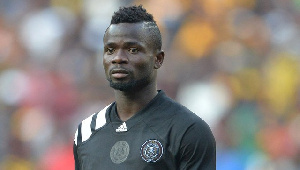 Morrison was involved in a physical altercation with Juma Nyoso – who has also been banned and fined – after Simba had been awarded a penalty in the 71st minute.

The Ghanaian was irked by a Shabani Msala poor challenge on Luis Miquissone as he entered into Ruvu Shooting’s area. As the players surrounded the referee before he awarded a penalty, Morrison appeared from the back and punched the Ruvu Shooting star and that escalated the tension even further.

“Simba player [Bernard] Morrison has been banned from featuring in three matches for hitting [Juma] Nyoso of Ruvu Shooting. Nyoso, on his part, has been fined TSh500,000 and a three-match ban given for intentionally stepping on Morrison,” a Premier League Board statement obtained by Goal read.

Morrison did not receive immediate punishment from centre referee Abdalla Mwinyi from Singida even after Nyoso showed where he had been punched by the former Orlando Pirates winger.

The escalated tension on the pitch delayed the match for over four minutes and it took the intervention of Simba captain Bocco – who did not manage to convert the penalty – to calm the players from both sides down.

Ivorian defender Serge Wawa had to pull Morrison to the sidelines away from the irked Ruvu Shooting players.

Simba ended up losing the match with a 1-0 scoreline and it became their second straight defeat in the ongoing season.

The three-match ban will mean Morrison is not going to feature in the Kariakoo Derby against his immediate former side Yanga SC on November 7 at the Benjamin Mkapa Stadium.

The Yanga against Simba encounter was expected to be highlighted by Morrison’s presence given that his August move created friction that is yet to be settled by either side and the Tanzania Football Federation.

Although the Players’ Status Committee declared Morrison a free agent paving way for his Simba move, Yanga are still contesting the legality of the contract which they have maintained is legally deficient.

The first match the Ghanaian will sit out will be the Mwadui home encounter on October 31 and the last one will be the away tie against Kagera Sugar on November 8.

His absence has occurred when Simba have parted ways with goalkeeping coach Muharami Mohamed and team manager Patrick Rweyemamu after two losses.