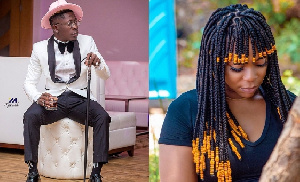 Speaking on a wide range of issues during an interview with Sammy Flex on Zylofon 102.1 FM’s showbiz agenda, Ghana’s ‘dancehall king’ Shatta Wale has revealed reasons for the absence of his baby mama, Michy from his birthday party.

When asked by the host why Michy wasn’t present at his birthday party dubbed “Shattabration” a few weeks ago, Wale stated that he invited Michy, just that Michy had to attend to other things which involved his son Majesty hence her absence.

Well, Shatta Wale’s assertion made during the interview contradicts what Michy said when a fan asked why she was absent at Shatta’s birthday party.

President Nana Akufo-Addo has succeeded in creating yet another buzz for himself ahead of coming Monday’s general elections like he did ahead of the...
Read more

President Nana Akufo-Addo has succeeded in creating yet another buzz for himself ahead of coming Monday’s general elections like he did ahead of the...
Read more
- Advertisement -

ADVERTISEMENT Shatta Wale has advised Ghanaians about their participation in violent actions that are brought up by politicians before or after...
Read more