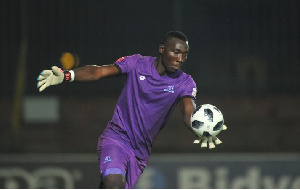 The Soweto Derby is the biggest football fixture in the South African football calendar.

Pirates were 3-0 victors over Chiefs at the Orlando stadium in the 1st leg of the MTN 8 semi-finals.

Ofori was handed his second start since joining the Pirates about a fortnight ago.

He joined from Maritzburg United following an impressive three-year spell.

The 26-year-old made his debut for the Buccaneers on Wednesday when they drew 1-1 with Stellenbosch FC in the South African league.

Non-voters don’t deserve a part of the national cake

Leader and Founder of Ghana Freedom Party(GFP) Madam Akua Donkor says she will sack children of Jehovah Witnesses from the various public schools in...
Read more

Non-voters don’t deserve a part of the national cake

Camidoh awarded Emerging Artiste of the Year at UMB GTA 2020

A prominent ally of Donald Trump has urged him to drop his efforts to overturn his loss to Joe Biden in the US presidential...
Read more