You’re messing with the economy, I’ll clean it up – Mahama to Akufo-Addo 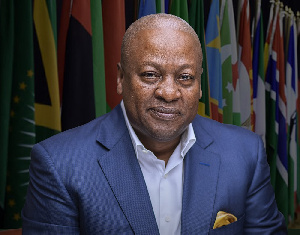 The presidential candidate of the National Democratic Congress (NDC), John Dramani Mahama, says his party has what it takes to clean up the “mess and rot created” by the Akufo-Addo administration.

Addressing a durbar of chiefs and people of Adjei Kojo in the Tema West constituency, as part of his five-day campaign tour of the Greater Accra Region, Mr Mahama said the NDC is very much aware of the mess that has been created by the Akufo-Addo administration since assuming office in January 2017.

He was surprised at how the Akufo-Addo regime ended up creating its mess, given that it inherited a sound economy from the Mahama administration.

“In 2016, I passed the ESLA which is the Energy Sector Levy Act and that act alone in 2017 brought in GHC3 billion. And who inherited that money? President Akufo-Addo inherited that money. I set up the Ghana Infrastructure Investment Fund and I put seed money of $270 million and I left it to President Akufo-Addo. where is that money? When Covid happened, but for the Stabilisation Fund that was set up in my time, the 1.2 billion that they had taken from the Covid fund to provide food for the people, to provide PPEs for people and stimulus packages for people, if I hadn’t set up that Fund, we wouldn’t have gotten that 1.2 billion”, he said.

Mr Mahama said his government also left behind more than $300 million in the Sinking Fund, adding all of these are verifiable. “How much is he going to leave for President Mahama in 2021?, he asked.

Mr Mahama said the Akufo-Addo regime has emptied the coffers of the Ghana Infrastructure Investment Fund and has made no contribution to both the Sinking Fund and the Stabilisation Fund.

He added the Akufo Addo government has rather succeeded in mortgaging the energy sector levy for the next 10 to 15 years, including the GETFUND which the government has also mortgaged for 10 years. “And so he is rather going to leave a mess to the new NDC government that is coming after 2021. But like I said, let us never give up hope because we are masters at turning things around. We will inherit a mess but by God’s grace, we will turn things around”, he assured.

In light of the recently commemorated World AIDS day, Ghgossip wants to look at some celebrities living with the disease.READ ALSO: List Of Actors...
Read more
Local News